I had a recent conversation with a young woman friend.  She is in a relationship.  They are having growing pains.  After an hour  conversation about what is not working, and what she would like to have work, she says “I just want to get to the “fa la la”.

I tried not to laugh, because she was dead serious.  I am not an expert on relationships.  I have been married before and am happily married now, but it didn’t just happen…it didn’t just fast forward to the “fa la la”.  I guess, I should have asked her to “define” the “fa la la”, but I took a leap of faith, thinking she meant to the part of the relationship that is familiar, that is full of ease and peace.   That is full of quiet.  That part that feels safe.    I say this, because the “growing pains” she is experiencing have to do with communication, what she feels is lacking in the relationship.

I sometimes wonder if today’s generation of women are ok with quiet in a relationship.   I have a varied group of friends, some of them are younger than me, some are my age or older.  They express frustration with a partner or spouse who may listen to them, but may have little to say or add to the conversation.  I tell them, in my experience, women are “resolution”  creatures…we define an issue and set to resolve it, after we have laid out every step of that resolution.  Men, are “action” oriented.  They identify the issue and fix it.      They don’t necessarily want to talk about the steps to get to the fix it part.  They do, however, want recognition for having fixed it…that part of the issue, they do like.

I also feel that given my young friend’s frustration about the “fa la la” that she wants to cut to the chase and get the hard part of relationship building over with.  “Instant gratification”.  I am not fond of that term, but it works in this case, because I have seen a growing frustration with young couples when they reach the “plateau” in their relationships.  You know what I am speaking of, when going out to dinner is part of your “routine” and not a special occasion.  When you can watch TV together in the evening and not discuss the plots, or much of anything.  When you make something “special” for dinner, and he says nothing of it, while eating it in front of the TV.  When you don’t take exception that he would rather drink beer with the guys then have wine with you.  When sex becomes part of the nighttime ritual, like flossing your teeth and gargling before bed.

Successful anything takes work.  Relationships, in which children, income and emotions are involved, shouldn’t be easy.  Too much is at stake.  You should be doing your best work and putting your best effort into something that involves lives, livelihood and your well-being.  I don’t have the answer for my young friend.   I know that my relationship with my husband, may seem to be one of ease, to those who view us.  Those of you who know me or have read my posts, know, this is not the case.  We both bring issues to the relationship that complicate or add to the work we have to do.

All, I know is that the payoff is we have the ability to laugh and appreciate the joys, big and little, that our life has given us.   It is not just enough to listen to each other, as it is to hear one another.  I miss him when he is away, but I am comfortable in the quiet that he leaves behind.   And, yes… it is still a big deal when he reaches for my hand.  It may not be the “fa la la”, but it works for me. 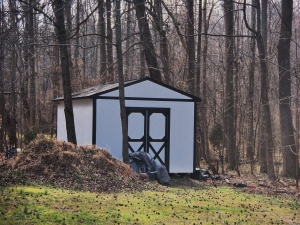 My husband returned from a judo tournament recently in Atlanta where he shared news of a dear friend. “Man-Cave” was mentioned with frequency. 60-inch plasma TV, not with surround sound, but a speaker that projected the sound out, so that none of the sound was lost to the back of the tv.  Very important.  “Pool table” and “bar” were mentioned. Guest room and bath, as well. The all important refrigerator and stocked liquor cabinet. My husband does not even drink, but he took note of the quality and quantity of adult beverages available. Indeed, a near complete renovation of a basement to “man-cave”. A place for the trophies, awards and memorabilia from a beloved sport. 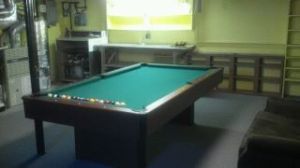 A recent post from a friend who has moved to the east coast from California, had a picture of a pool table in a room. The post was titled simply “the new man-cave”. I learned of these “man-caves”, before this term was coined on HGTV. My husband described them as “bunkers”.  Bunkers – “shelter” or “fortification”.

As in the fellow veteran who had a hidden room behind a secret door in his house, where he used to “retired” from the grandchildren. Then one day one of the kids spied him coming out of the room and the refuge was no longer a secret. Now all the grandkids want to accompany him there.

I used to think it was a result of PTSD. A need for separation and solitude. I later realized it was a “man” thing. My dad has a bunker. When he had his own business, he had a desk in the office he shared with my mom. In the warehouse, he had another desk, where he would listen to music, read the paper, retreat from the phones and chatter of the front office. At home, he shared an office/library retreat with my mom. That room has stayed a part of the makeup of their new home. Only addition, a computer, that he only uses for entertainment. My dad does have a space in the garage where he has displayed some of his Navy memorabilia and his caps and trophies from softball. If there was more space, I am sure he would have a chair, but it stays too hot most of the year, so he opts for an outdoor seat on the patio. You can find him there most mornings with coffee and the paper. 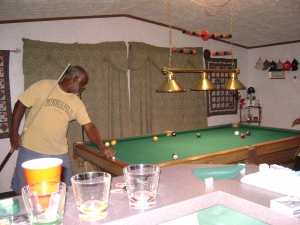 My husband’s uncle has a little shed where he works on “projects”. He constructs BBQ’s, welding pieces in place. He has electricity out there with his little am/pm radio playing a gospel station. One brother has a game room with TV and video games. Another brother has  “game” room that houses just his pool table.  However, that game room is as big as his living room.

Ask me about my husband’s bunker, I would tell you that the whole house is his bunker. Then, a couple of years ago, he bought a shed. The shed is where he keeps his tools, motors and various parts. It was purchased initially to replace storage we have in town for the boxes of clothes and things we no longer wear or remember we have. I brought my totes filled with Christmas ornaments to the shed. It was the only time I went to the storage in town. Now, I fumigate the shed for the same reasons, even more so, since we are in the woods and spiders abound. But, the trek from the shed to the house is thirty feet, give or take.

Recently, determined to complete a New Year’s resolution to cut unnecessary expenses,  we were cleaning out one of the two storage units we have in town.  I mentioned to my husband, that we should pare down our storage items so that all would fit in the shed. My suggestion was met with silence. I paused in my efforts to bag forgotten wrapping paper and bows from a Christmas long, long ago, looking at my husband, who was studiously trashing a collection of seven-year old MotorTrend magazines. I understood the shed was for storage once we eliminated these units, I threw out there, recalling the conversation we had when the shed was delivered. A long quiet pause developed and then he merely said that he had begun to rethink that. I left it alone.

I have a picture that I took of him sitting in the doorway of his shed, not long after we bought it.   I had given him an old “boom box” that did not play CD’s, even though it was bought for that purpose. But, it could play the old cassettes we found in a shoe box or bottom of a packed box of memorabilia from our lives before we met. He had Johnny “Guitar” Watson playing and he was cleaning parts and organizing tools. I was reminded of when we would drive up to his uncle place and see him on the porch of his shed, sitting at a workbench. It was a “retreat” of sorts for them, to have solitude, a controlled environment of wood, drill bits, metal shavings, oil, and gasoline. As in the man-caves, with pool cues, cd’s, woofer, video games, leather, wood, plasma and remotes. A “shelter” (retreat) where the volume could be as loud as the insulation allowed, where trash-talk was the rule, and the rules of the games were “house rules”. 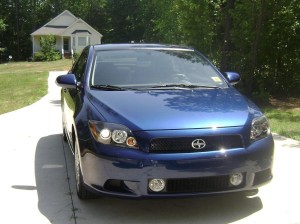 My husband doesn’t know this, but I” heart” his blue Scion TC. I have my own car, a red PT  Cruiser that he bought for me after my old reliable Intrepid was totaled in an accident. Don’t get me wrong, I enjoy my PT Cruiser with leather interior, moon roof, Sirius radio, seat warmers and room for groceries and corn for the deer…but that TC, it rolls.

We bought it at night, the metallic flakes in the paint on the TC sparkled like a wannabe low-rider’s hydraulic special from back in the day. My husband thinks I am an anomaly because of what I know and like about cars…I have been married before and all are car guys…Chevys, Fords and now Chryslers. I know, I know, the Scion is a Toyota, but that’s beside the point…it goes fast and it takes regular gas. When we bought it, gas was around $4.00 a gallon and we both were traveling 100 miles a week easy.

The first long distance trip we took in the Scion was to Huntsville, Alabama. We saw our friends, Sam and Karen, at a family reunion there. Three great days of food, song and family. The young family members loved the car, it is of their generation. The older family members didn’t blink, especially our hostess who had a classic TransAm in her driveway. My husband was in his fifties, then…but we all know, he’s never left the year 1969.

The last long distance trip he took in his Scion, was around this time, last year, to California to bury Karen, who left us so suddenly, we are still reeling. He grieved the 2600 miles there, so he could better help Sam and the family. Sam was our best man when we got married, but my husband has known them all his adult life. He lost a sister in Karen.

Last time I drove the Scion to visit my friends in Charlotte, I was minding my own business, when a twin Scion came up on me. Twin, but not identical, because it did not have the tint on the windows that ours has. Nor did it have the ground effects package that my husband ordered, and chances are it didn’t have the chip nor the long cool air intake system my husband had installed in it when we bought it. I told my husband later, that I forget that the kids think there is another kid inside our car, not some 56-year-old grandmother…but I didn’t feel 56 when he tried to jump on me and I left him in the dust on I85.